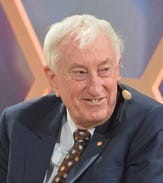 The Professor's research focuses on the immune system, and his Nobel work describes how the body's immune cells protect against viruses.